A good independent rock singer might lean hard on a personal sound, the flexibility of his voice, his ability to stand up to the challenge posed by a loud backing band, the purity of his tone, or on sheer lung power. If you possess any of that, you’re likely to make a name for yourself. If you’ve got all of that – as An Old Friend singer Cody Kohler does – you’re likely to make history. 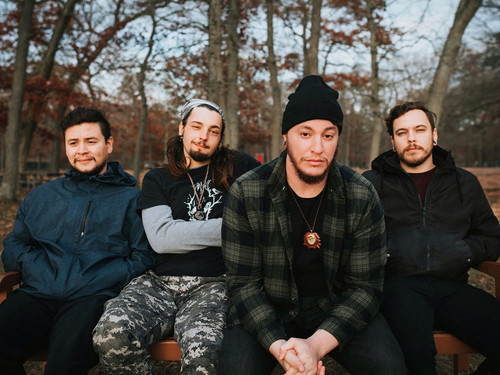 But a vocalist is nothing without an equally talented band behind him – and when you watch “Nesting,” the newest video from An Old Friend, we think you’ll agree that you’re in the presence of a world-class act. They’re not particularly showy, and Kohler doesn’t grandstand, but he’ll hit notes that other singers can’t, and he’ll cover emotional territory that few can reach. The band have a sureness and confidence that allows them to take compositional chances and chase their artistic impulses. Songs by An Old Friend are always melodically and rhythmically inventive; they’ll take you by the hand and lead you along uncharted roads. With Kohler’s lyrics as the guide, no matter how winding the path, his steps are sure.

An Old Friend hails from Long Island, and they proudly draw from the punk, hardcore, and emo tradition that their region is famous for. Echoes of adventurous bands like Explosions In The Sky and Pianos Become The Teeth (who they’ve played with) are apparent in their sound. But as songs like “Nesting” demonstrate, they’ve developed a style all their own, and one that can’t be comfortably categorized. An Old Friend is ferocious yet comforting; they’re confrontational yet magnetic; they’re impulsive and occasionally dizzying, but never bewildering. Because of the formidable talent of these musicians, they’re able to harmonize all of the contradictions and produce music that truly deserves to be called progressive.

They’re a thunderous, mesmerizing live act, too. Tom Flynn’s clip for “Nesting” catches An Old Friend in action in a handsome country house – and suggests exactly how much dynamism the group can bring in a concert setting. This house is haunted, and its occupant is chased into the forest by the specters who lurk behind every doorjamb. Finally, he’s cornered in a copse, and there, he’s forced to confront the truth about his fears.