If you’ve ever suffered insomnia, you know: it’s debilitating and emotionally destabilizing, and the accompanying exhaustion can lead you to some severely altered states. Antoine Honorez – the man behind the breakout dream-pop project Napoleon Gold – has gone through some memorable stretches of sleeplessness. The clip for “Love Don’t Cut Me Down,” his popular summer 2019 single, confronts the problem head-on, with sensitivity and occasional flashes of humor, and the same hallucinatory intensity that we’ve come to expect from the dazzling, shimmering music he makes. Napoleon Gold has had an assist from Annie Merrill, the winsome front-woman of the Santa Barbara-based offbeat pop group Haiva Ru. Merrill doesn’t just provide the song’s powder-soft vocals; she’s also the star of this dreamlike, sexy, and wonderfully peculiar video. 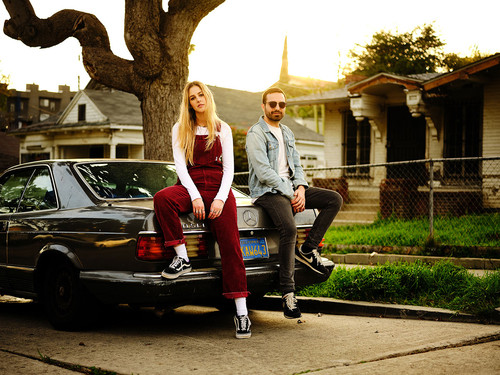 Like other talented insomniacs, the Luxembourg-based, France-born Honorez has found inspiration in sleeplessness. His music glows with a pre-dawn quality: the gorgeous bleariness, the surreal visions, and the sudden flashes of insight common to those few who can’t conduct their dreams in a conventional manner. (Insomnia even inspired the artist’s handle: Napoleon Gold is the name that Honorez gave to the early-morning light). Sunset Motel, the latest set from Napoleon Gold, is rich with wee-hours haze and longing; this is a nostalgic trip, and you’re warned that exposure to material this resonant may bring childhood or adolescent memories back to your consciousness. Honorez’s powers have made him an in-demand collaborator for other artists looking for a little of the restless magic he generates so effortlessly: he’s worked with the like-minded artists in Sun Glitters and Monsoonsiren, and he’s enticed Anna Majidson, Jesus Honcho, PH Trigano, Jalen Santoy, and other visionary musicians to contribute their talents and abilities to Sunset Motel.

Directed by Maria Skobeleva (Travis Scott, Tyga, G-Eazy), the “Love Don’t Cut Me Down” clip, however, foregrounds Honorez’s powerful musical connection with Annie Merrill. We don’t know if she’s experienced sleeplessness of her own, but her understanding of the Napoleon Gold song is total, and her empathetic performance makes the song’s troubled undercurrents palpable. The camera catches her in an apartment at night; the environs are stylish, but chaos is seeping through the cracks in the windows. Water drips from the ceiling and dampens the newspaper clippings that stare back at her from the wall. In the video’s most striking shot, Merrill sits in a bathtub, fully clothed – there in body but not entirely there, not discontent, not bathing, not entirely inactive, not exactly present to the moments as they slide by.