The Parlotones release their latest single “Antidote” from the current studio album China and drop with it a brilliant cinematic Siren inspired music video. 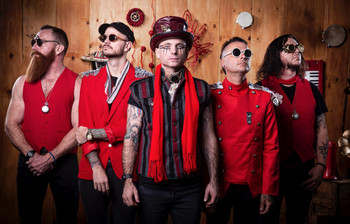 Written by Parlotones member Rob Davidson, “Antidote” plays with a dark theme while wrapped in an upbeat 80’s inspired feel. Davidson delves into the writing and production of the song, adding: “The song tackles the theme of ‘last chances’ and admitting fault in one’s self. It pleads for one more shot at being the person the other one deserves by changing their selfish ways and growing as a person. Originally written as a piano ballad, it took on an 80’s synth pop vibe reminiscent of Pet Shop Boys/Depeche Mode to create a more upbeat song but with a darker undertone. It asks for forgiveness but also knows you have to sleep in the bed you made.”

The music video adds a brilliant visual scape to the song with the concept inspired by the lyrics taken from the chorus. “The idea came from the lyrics ‘You’re the ocean, I’m the sea. You’re the voice that calls to me’, which in my opinion represented the lust struggles of the Sirens and sailors,” explains Music Video Director, Ryan du Toit from Dutwaa Creative Agency+. He continues, saying “The story to be told was a reflection of love struggles in today’s life, which is shown in the video by visualising ‘capture, lust, allure, death and entrapment’. During the video the idea was to show all the past lovers dead in the water, but all warning signs are ignored. A man set on course to find love no matter the consequences.”