Lush vocals and a natural cadence to vocalist Suzannah Raudaschl of the band Bridal Party adds wonderful depth to the stirring song “Nectarine” from the forthcoming album Too Much. The band, also comprised of Joseph Leroux (guitar), Lee Gauthier (bass), Adrian Heim (drums) and Jordan Clairmont (keyboards), has a slight affinity for a somber mood painted across an upbeat music bed. This song is neither sweet nor tart; “Nectarine” is a lofty, subdued tune ripe for the listening. 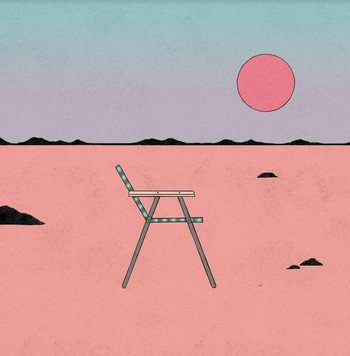 Bridal Party, a band hailing from Victoria, British Colombia, frames “Nectarine” with subtle guitars, stumbling along percussion and quirky keys. It’s a memorable music bed, but nonetheless, modest. The real promise and magic lies in Raudaschl’s ethereal, mesmerizing vocals. She’s poetic and confident without being aggressive or raspy. She has this slight tremble – revealing to the listener and encouraging an intimacy and vulnerability. The Canadian’s voice is flowery, but less pop-sounding than say Leigh Nash from Sixpence None the Richer (“Kiss Me”, “There She Goes” etc.). The band’s official bio compares the band’s “broad sonic landscape that shares territory with Crumb, U.S. Girls and early work of The Cardigans.” It’s divine when Raudaschl sings “nectarine” breaking the song into threes. It’s like she’s savoring each bite at the word; the listener stop-go’s at each moment.

Lyrically, the song falls into a more prose atmosphere. As the words “look out the window” fall into place, the backing music projects a slight dramatic push, but again, it falls into an unassuming role. No, not mellow, but engaging and twirling around the potent vocals. The bass – it picks up where it needs to and matches the tonal values of not only Raudaschl’s vocals, but in a familiar way, attracts the “Nectarine” chorus to its clutches. There seems to be no filters or diffusion of sound and the naturalness of it all is on point. The overall sound is very crisp and organic – certainly not earthy brush strokes – but modern clicks and driving moods.

The accompanying video to “Nectarine” is painted with hues of pinks, greens, blues and of course, blood-orange. One might describe it as a Vermeer painting with its specific soft lighting and bold color contrast. Just as in the song, the video uses a window as a symbolic center, along with an actual nectarine. The band is featured in rooms that seem to correspond, with the nectarine being gifted. The actual plot is a bit hard to follow, as is the meaning of the song, but no matter, the mind drifts into a wonderful space of imagination and Bridal Party presents itself and the song in a stunning light. Still, the window and little vignettes of presumably male suiters haunt the viewer and listener. Why is the meaning behind a cartographer, or is he just a world explorer with an agenda, with his spinning globe? Why is one of the guys dressed like a distinguished gentleman in an ascot wrapping the nectarine in colorful tissue paper? So many questions and a whole lot of time to interpret any which way one would like. That’s the real beauty of this song and its music video.