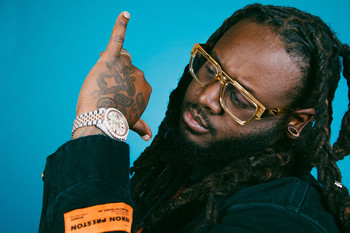 Following the surprise release of 1UP last week and his win on Fox’s The Masked Singer competition, T-Pain is sharing a new video from the album. The Edgar Esteves-directed visual for “A Million Times” was shot at Meow Wolf in Santa Fe, NM and features Long Beach-raised rapper O.T. Genasis, who propelled to viral success behind breakout singles “CoCo” and “Cut It.” The video finds T-Pain entering a new dimension and navigating its various levels alongside Genasis, proving his place as one of the best.

1UP signifies a return to form for T-Pain, as he breathes new life into hip-hop, as alluded to in the album title’s reference to video game culture. Upon its release, the album peaked at #1 on the iTunes hip hop charts and includes previously-released singles “All I Want” featuring Cinematic labelmate Flipp Dinero and “Getcha Roll On” featuring Tory Lanez alongside new collaborations with Lil Wayne, Boosie Badazz and more. T-Pain also recently made an appearance on Ellen to speak about his Masked Singer win and the story behind his Monster costume.

1UP builds on the success of a busy 2018 for T-Pain, in which he launched his new Fuse TV series T-Pain’s School of Business and hosted several episodes of Red Bull’s Remix Lab livestream show with guests like Cardo and MurdaBeatz. T-Pain’s School of Business follows the charismatic T-Pain as he explores 18 of the most innovative and unique startups, created by millennials and Generation Z, that are defining the future and disrupting industries as T-Pain did when he changed the course of music with his signature sound. T-Pain was also recently featured on the soundtrack for Lego Movie 2 with “Catchy Song,” which made its debut on Good Morning America.