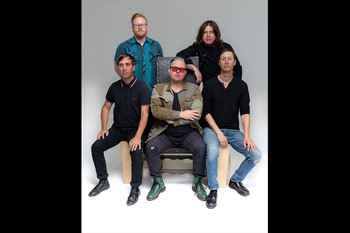 Public thought on artificial intelligence or technology takeover has barely been formulated, let alone sung about, but southern California based indie group Fellow Robot is ready to be the forefront of the conversation. Fellow Robot knows that the penetration of artificial intelligence is not something to overlook. Before Fellow Robot, the band’s mastermind Anthony Pedroza played in his band Mr. Moonshine in Long Beach, CA. There, he connected with his current band members: Luiz Renteria, Jon Zell, Michael Adams, and Roberto Escobar. Fellow Robot breathes dystopian possibilities, peculiar manifestos, and captivative unravels of humanity.

The idea behind Fellow Robot has been building in Pedroza’s mind for some time now. A few years ago he began to write the sci-fi novel, The Robot’s Guide to Music while dealing with personal trouble. The concept albums for this project, The Robot’s Guide to Music Vol. 1 (2018) and Vol. 2 (set to release April 24 through Donut Sounds Record Co), are co-literary companions to the book. The band itself plays the role of the 140-year-old robot and main character of the book. Each official release is meant to build on and compliment the story of the past release.