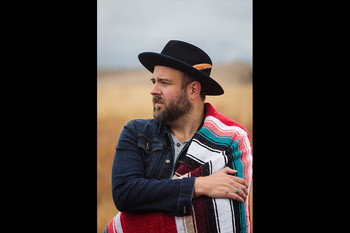 Is Nate Currin a madman, a poet, or a bit of both? He writes modern folk songs with care, grace, and attention to the nuances of the English language. They’re poetic, even if Currin is never ostentatious about it. As for the madman part- well, the single-minded intensity with which he’s chased his muse around the globe certainly suggests some inspired lunacy. Currin is a man driven to tell stories and make music, and there’s no mountain he won’t climb to perfect his songwriting craft. We’re not speaking figuratively, either: Nate Currin climbed Cader Idris in Central Wales in pursuit of a perfect song and camped on the peak. When he woke, he wrote the words to “The Madman & The Poet,” the title track of his acclaimed fourth album.

That was just over three years ago. Since then, Currin has toured relentlessly, sharing his particular vision and his irresistible melodies with audiences all over the world. He’s shared bills with Jars Of Clay, Butch Walker, Neon Trees, Blues Traveler, and many other kindred spirits. Now he’s back with Ashes & Earth, a new set that builds on the promise of The Madman & The Poet and brings its musical and lyrical ideas to glorious fruition. The bulk of the new album was recorded close to Currin’s hometown – Track Side Studios in semi-rural Gainesville, Georgia – and it shows. These are the frankest, most honest, and most direct songs Currin has ever written, and that’s saying something. They’re the work of a true poet, and they’ve got a spark of madness to them, too.