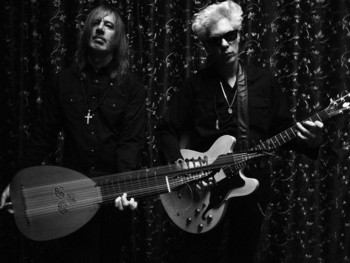 Experimental lute player Jozef Van Wissem and acclaimed film director and musician Jim Jarmusch have a working relationship that dates back to 2006, when they ran into each other on the street in New York City and quickly struck up a friendship. Van Wissem contributed to the soundtrack for Jarmusch’s 2013 movie Only Lovers Left Alive, and the two have collaborated on three previous studio albums — Apokatastasis, Concerning the Entrance Into Eternity, and The Mystery of Heaven. An Attempt to Draw Aside the Veil is their second release as a duo for Sacred Bones Records, following The Mystery of Heaven, and its narrative picks up where that album left off.

Like The Mystery of Heaven, An Attempt to Draw Aside the Veil delves into the theology of William Blake and Emanuel Swedenborg, this time also exploring the work of Russian occultist and philosopher Helena Blavatsky. The album is mostly instrumental, so the dialogue between the esoteric thinkers who inspired it and Van Wissem and Jarmusch is expressed primarily in the song titles — fittingly arcane phrases like “Concerning the White Horse,” “The Two Paths,” “When the Sun Rises Do You Not See A Round Disc of Fire.”