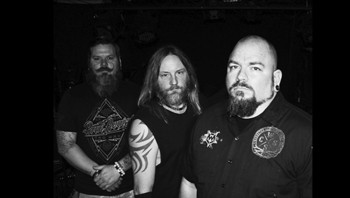 What do you think of when you think of Halloween? Black cats, jack-o-lanterns, horror movies, to start… what about some heavy metal? Just in time for the spookiest holiday of the year, hard and fast rockers Sin7 have shared their new video for “Erased” – and it’s sure to freak you out.

Composed of Rev Bliss on vocals, Nelly on guitar, and Hammer on drums, Sin7 formed in 2012 in Twin Cities, Minnesota. But while the band have been together for six years, each member has over 20 years of performing and touring experience from their previous bands , giving Sin7 a crowd-commanding personality to perfectly complement Nelly’s screaming guitars, Hammer’s earth-shaking beats and Rev Bliss’s skull-crushing vocals. The songs are carefully crafted with each note and lyric placed to complement one another, and each visual and live show is bound to grab your attention and leave a lasting impression.

The “Erased” music video looks like footage from a horror film. The clip opens with a woman walking down a hallway in an abandoned building, opening mysterious windows in doors to see the band members rocking out but with masks obscuring their faces. Soon, a demon makes his way creeping through the halls, attempting to steal away the members of Sin7 one by one. Throughout the three-and-a-half minute video, there’s a hazy, unsteady quality to the footage that makes it seem more documentary (and therefore more terrifying!) than theatrical.