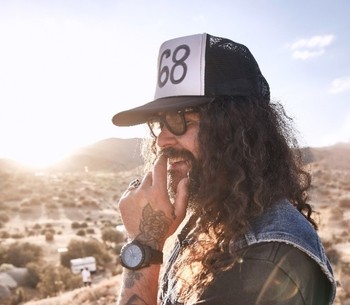 To celebrate his reissues on Heavy Psych Sounds, BRANT BJORK has just released a wonderfully intimate new music video for the track ‘Too Many Chiefs…’, taken from the reissue of 8-track acoustic album ‘Tres Dias’. Lay back and hang with the desert rock icon below.

“Some days I just like to sit outside under the sun with my guitar and sing my songs to myself. It relaxes me. It also reminds me of what my songs are about.” That’s how we know and love BRANT BJORK. After the successful release of his thirteenth solo album ‘Mankind Woman’ on September 14th, Heavy Psych Sounds Records is more than proud to re-release almost all of Brant Bjork’s back catalogue! The first two reissues, out this September, will be the classics ‘Tres Dias’ and ‘Local Angel’.

Produced, recorded and mixed by Tony Mason at the Back of the Moon Studios, Joshua Tree, CA in 2007, this 8-track mostly-acoustic album has been a mix of old and new tracks, often described as Brant’s most laid-back record to date. The history of BRANT BJORK is a winding narrative of relentless, unflinching creativity, for someone so outwardly laid back, he’s never really taken a break. And while Brant Bjork has shown many different sides of himself on an album like his 2007’s ‘Tres Dias,’ when you’re listening to Brant Bjork, you know it, because there’s no one else who sounds quite like him.