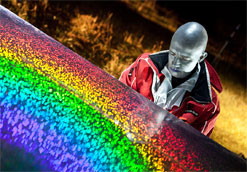 The Silver Snails are a band with a goal (to create the world’s finest pop rock) and a mission (to open human hearts through sound, light, and word) as lofty as they come. Their uncompromising, hands-on approach to quality and craftsmanship resonates across their media and branding, starting with their calling-card song and video, “Dancing With The Stars.” An Italo-US joint venture between lead singer Lucas Ward and his wife Elisa Fantini, The Silver Snails take inspiration from the family’s rustic backdrop in the wine country of Romagna, Italy, yet fashion a contemporary, artisanal pop rock for a global audience, like a fine silk tie from a Florentine fashion house.

Songs on The Seven Melodies, the group’s ambitious, harmonically rich debut album, are sung in English, French, Italian, Mandarin, and even a bit of Sanskrit. Taking deep space (specifically the M42 nebula) as its departure point, single “Dancing With The Stars” leads with a melody that reaches for the stratosphere. The style of the group is playful and theatrical, strongly reflecting early imprinting of Beatles, Stones, Bowie, Floyd and other invasive British species.

The clip opens with the band’s official astronomer heralding their arrival with his telescope pointed at the night sky. A playful search ensues wherein the group’s young ones are found wandering an exotic beach collecting silver snails by starlight, and re-united with parents in time for glam dance scenes in sparkle and glitter. The clip ends with the famous tone sequence from Close Encounters Of The Third Kind used as an ignition code for blast-off on their flying piano. (Pop cultural riffs, historical references, symbol & allegory seem to be the band’s stock and trade…)