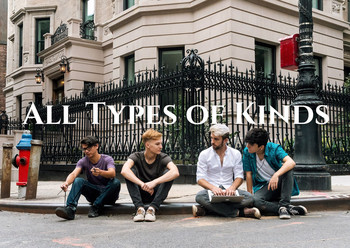 In a city often oversaturated with musicians of every genre constantly performing and creating, it takes a special group of artists to truly stand out amongst the crowd that produce a truly unique sound, and New York City’s All Types of Kinds truly live up to the namesake.

All Types of Kinds (or ATOK) plays a wide variety of music ranging from rock to pop, folk, punk, funk, hip-hop, blues, jazz, and country – even sometimes all at once. The members come from diverse backgrounds that make for an amalgamation of musical textures and vibes. Their EP, “Love Songs (Or Songs For Your Ex)” debuted on Valentine’s Day 2018 and they are currently gearing for dates all over the country.

The band consist of Ray Rubio (Guitar), Billy Conahan (Guitar), Berk 0 (Percussion), and Rocco Stroker (Guitar) – all of whom have unique musical backgrounds. Ray, 20, a multi genre artist and singer/songwriter, hails from Harlem NY and has also been on stage from young age, mainly theater productions. Ray attended the American Academy of Dramatic Arts in 2014, and since then has been performing his music in the New York Metro Area and Richmond, Virginia. Billy, 25, is a queens native whose been on the stage since his early teens as a stand-up comedian, singer/songwriter folk artist playing his own folk tunes as well as cover tunes. Berk O, singer and percussionist, is from Brooklyn and also contributes to the band’s songwriting process, while Rocco is the newest member of the band – playing bass, guitar and as an incredible vocalist. He hails from New Fairfield, Connecticut.