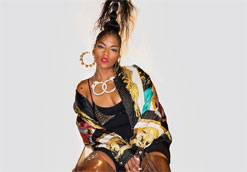 Originally from Atlanta, Mika Means has risen to snatch all of our wigs off. As an R&B and hip-hop performer, she can balance work and play, and has been juggling quite the resume as a songwriter, entrepreneur, creative and music maker. Holding the true definition of branding oneself as an artist, she uses her position in the industry to empower women to be independent and to push the boundaries of creativity outside of the structured set of roles.

This isn’t Mika Means’ first rodeo, as she has rounded up some serious supporters including Kelly Rowland, Elle Varner, Monica, BabyFace, and close friends Missy Elliott and Lil Wayne. Even though she just started to push her solo career she has been a part of the business for close to a decade now writing songs for notable gold and platinum artists such as Bando Jonez, Chris Brown, and Zomboy. She has rightfully earned her place, performing with The Girls Club across the country as well as at Miami’s SunFest. She has been known for her featured artist spots on countless blogs as they try to keep up with her fast flow and delivery. She released a tune entitled “Traffic” up on free streaming Soundcloud and it received a great response with almost no promotion. With her talent speaking for herself, she has big plans for the upcoming year including releasing her debut album, Sheezus Christ. In her partnership with the well-respected Devil Hills Entertainment, she is celebrating the release of her latest installment, “Single Life.” The existence and presence of this song is just a taste of what is to come as she embarks on the journey to find and complete herself.