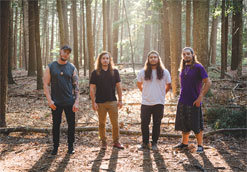 An Old Friend is more than just a reference to a forgotten flame. Raw around the edges, this well-crafted alternative band subverts traditional conventions. The members of An Old Friend – Cody Kohler on lead vocals and guitar, Eddy Barrera on guitar and vocals, Cory Brown on bass and finally Frank Facompre on the drums – write their songs as a collective. Unafraid to switch up their musical musings, they add mixed elements of rock to produce the ultimate indie/progressive emo band. Painting with a color palette of various influences, they reject the primary as they reinvent different sensations to the ear- thus reflecting promising light. Formed after their high school days, they all have experienced hardships in their own singular emotional bubble that has come together to pop.

Bursting out of Long Island, An Old Friend have an undeniable New York feel. The band formed in 2011 as a concept which was quickly brought to life. Picking up the guitar and pen for the first time not too long ago, Cory Kohler and his bandmates have built a strong momentum. Their talent grows with variety created by a meticulous habit to build upon their past; in 2013 they found their voice with their debut EP Quiet Drive. Then after put out a series of singles as music videos including “Scavenger Hunt”, “Fragments & Blurs”, and “They Feed On Me At Night” to highlight their intriguing visual content as the missing pieces come together in effortless completion. In their latest EP I Am, I Was, they pull out all their wildcards as the listener folds.

For their latest music video for “Lady”, An Old Friend take us on a not-so-romantic date. Front and center in a remote studio loft in Brooklyn, the band takes command over the room. With Tom Flynn’s guidance, the camera pans to each member’s facial expression displaying concentration with lapses of emotional uncertainty. The video is simple in concept which matches the underlying disconnect in their relationships. Highlighting the complicated feelings of being in the right place at the wrong time, they still hold hope for the idyllic, romanticized version of the person they created. As the video progresses, they let go of the person they once knew, and their evolution ensues as they process their misunderstood picture.