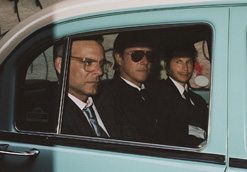 New York City’s own Interpol has revived a dead genre not only once but twice. They were one of the leading post-punk revivalists of the 2000s and 2010s while guiding their sound to take a more indie approach. Taking inspiration from Joy Division and The Strokes, the band carries a somber feel in their tone and lyrical content. They fill their lyrics with detached thoughts, characters, and observations which allows them to be accountable for their actions, which highlights their integrity and morality. As the band members support one another in their chaotic breakdowns, it creates a bond as they generate their own shared experiences.

Interpol has created trends since their 2002 debut album Turn On The Bright Lights; it was followed by a series of successful albums (2004’s Antics; 2007’s Our Love To Admire, which peaked at number four on the Billboard Hot 100 chart; 2010’s Interpol; and 2014’s El Pintor). Daniel Kessler (guitar), Paul Banks (vocals / guitar), and Sam Fogarino (drums / percussion) are gearing up for their sixth album and they are ready to go in guns blazing as their psychedelic trip takes them to the deepest and darkest corners of their mind. Entitled Marauder, the album is set for release on August 24th and in the spirit of the Leo moon, the record is commanding. Instead of focusing on their melancholy and meticulous previous work they have crafted an indie-centric record that refuses to be flattened or defined.

“The Rover”, Interpol’s latest video, is a trip and a half. In this clip, the band takes us on a journey through their lives as the viewers see a whole new perspective. Directed by Narcos producer Gerardo Naranjo he engulfs us with a psychedelic experience through witchcraft markets, subways, press conference and police barricades. Acting as a prequel for the birth of a cult leader, men are subjected to great pleasures as the minimal visuals highlight Banks’s internal turmoil as he jumps out of a car unable to deal with the consequences of reality. Soon, a different group picks up the lost performer as they lead him into clarity while also being unaware of the travels ahead. As the video and trip come to an end, Banks finds comfort within his own band once again ending his existential crisis while the questions finally lead to closure.