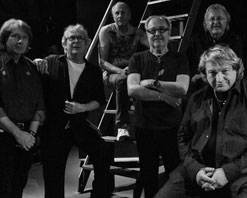 Classic. It’s a word that is, too often, used prematurely, by critics and fans alike. To be a classic, it isn’t enough for a song to stand the test of time. A classic is also flexible: it speaks as clearly to future generations as it does to the generation that first heard it. A classic can be infinitely reinterpreted, and updated, and dressed up in different styles, and it’ll still shine. Most bands are lucky if they make a single record that attains classic status. But the extraordinary Foreigner has given rock fans classic after classic – songs that inscribe themselves on the great world playlist and never budge. We don’t have to list them, because you know them all: you can sing the choruses and you’ll never forget those adamantine riffs and hooks. They’re as undeniable today as they were when they were released, and as long as rock music is played, they’ll continue to be heard.

We can give you the numbers – ten multi-platinum albums, sixteen Top 30 hits, seventy-five million albums sold – but we know that statistics can’t capture the bond a great band has with its fanbase. Foreigner’s songs are living things, and they continue to change and grow as the group evolves. And remarkably for a classic rock act, Foreigner keeps breaking new ground. Foreigner With The 21st Century Orchestra & Chorus is a collaboration between guitarist and founding member Mick Jones and symphonic arrangers Dave Eggar and Chuck Palmer. They’ve applied the color and dynamics of a symphony orchestra to Foreigner’s catalog, and teased out every ounce of grandeur from songs that were already dramatic.

Foreigner With The 21st Century Orchestra & Chorus was recorded in Luzern, Switzerland in front of an ecstatic audience and captured on video, and since everything about Foreigner is maximalist, we couldn’t be satisfied by sending you a single clip. Instead, we’re sending two. The videos on this reel span Foreigner’s career: early smash “Double Vision” from the searing 1978 album of the same name and the taut “Urgent” from the 1981 landmark set 4. Naturally, these videos capture the members of Foreigner performing with the passion that’s helped to make them famous – but what you might not expect is how captivated by the music the orchestral players and choral singers are. They can’t suppress their smiles. You won’t be able to, either.