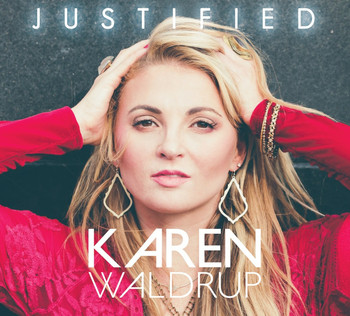 Charismatic entertainer, innovative entrepreneur and country singer/songwriter Karen Waldrup released her full length debut album in partnership with The Fuel Music on Friday, July 13 and a week later she’s officially “justified” thanks to four Billboard charts. Justified, the album she’s always wanted to make, landed at #26 on the Country Albums Sales chart, #44 on Independent Albums chart, #14 on Heatseekers and #7 on Heatseekers South Central. The album, produced by Garth Fundis and completely funded by fans all over the world via an Indiegogo campaign, is an eleven song album featuring a fresh new country sound meshed with the soulful nostalgia of Waldrup’s home state of https://open.spotify.com/album/7lIpVm1t01328PnQ551rRhLouisiana.

“I can’t believe it and I couldn’t be more thankful to my Waldrup Worldwide Family,” exclaims Waldrup. “I always dreamed my debut album would land on the Billboard chart and I’m beyond ecstatic.”

Waldrup wrote or co-wrote 9 of the 11 tracks with Nashville friends and fellow songwriters including Julia Cole, Anthony Smith, Donnie Skaggs, Ed Hill, Brian Kolb and others. The album features title track “Justified,” that Music Row magazine calls “a soul-rock tune that showcases potent, wailing and penetrating vocalist with moxie and fire,” the catchy party anthem “What Goes On In This Bar (Stays In This Bar),” Waldrup’s viral version of “I Hope You Dance,” the Lori McKenna penned love song “Sometimes He Does” and the vibey and sultry “Slow and Easy.”