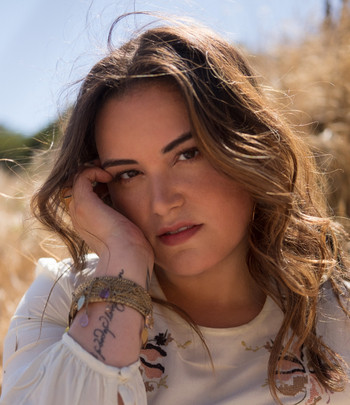 After living the visions of other artists as the lead singer of numerous rock, metal and electronica bands, the well-traveled, long gigging L.A. based singer-songwriter who became Reina Mora chose the perfect moniker to capture her multi-cultural background and Latin-tinged vibe she brings to her fresh brand of alternative pop. The exotic national bird of Puerto Rico – where her parents were born and she lived for several years growing up – the Reina Mora is colored blue, yellow, orange and black and is known to sing all night long.

Reina offers a powerful and compelling introduction to her developing artistry with the release of “Trouble,” the sultry and sensual, yet eminently rockin’ lead single from her upcoming full length debut album Birds Eye View. She is simultaneously dropping the steamy video that finds her performing onstage while also becoming the fantasy of a dapperly dressed man on the dance floor. Directed by Sabina Graves and shot by veteran Director of Photography Mathew Macar, the clip will be available on Reina’s YouTube channel and other outlets.

“Trouble’ is about taking control over your sexuality,” Reina says. “I wanted to write a song about being seductive and empowered as a woman with that sexuality and not be ashamed of it. I was a tomboy growing up and previously never spoke about sex in my songs, so in the spirit of the authenticity that drives the entire album, that was one of my inspirations. The others were the classic ‘Criminal’ by Fiona Apple and ‘Do I want to Know?’ by Arctic Monkeys. ‘Trouble’ reflects my influences, from the singer/songwriters I love to the Latin music I grew up listening to. Thematically, the trouble can go either way – either I am trouble or the guy is…I wanted to leave the interpretation open as far as who is seducing who.”