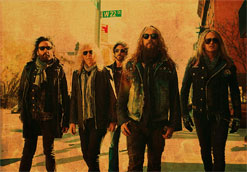 “The Dead Daisies” are no strangers to the gritty world of Rock n’ Roll, and their latest smash, “Dead and Gone,” is only a glimpse of what this Australian-American band truly represents. The classic rock sound that millions have adored is not dead, and they are here to prove that to the world. They are tough, rough around the edges, and everything you would expect a rocker to be. The second their latest song commences, you are met with their heavy guitar tones and heart rocking drums, while powerful vocals float over the band.  In an instant, this track makes you feel you can take on the entire world and whatever is thrown at you, and in this video, you will need it.

The visual aspect of “Dead and Gone” takes you into a post-apocalyptic world of decrepit and decaying zombies who seem as if they will pounce on any ounce of human flesh if given the chance. Directed by sci-fi/horror award winning writer and director Tony E. Valenzuela, he creates an overwhelming amount of tension and unease with his edits and style alone, which will surely make “Dead and Gone” a video that is permanently embedded into your brain. Without hesitation, you are met with zombie antagonists who waste no time in making your eyebrows raise and get you thinking how you would handle fighting of this herd of living dead. With fresh wounds and yellow teeth, viewers are going to find themselves completely immersed in these creatures whether they like it or not.  Though these zombies leave you in disbelief, our rockers are not to be overshadowed by them. Their intensity and passion for their craft along with every other element of this filmic masterpiece allow viewers to be rocked to their core, they are complete veterans of the stage. If you’re a fan of heavy rock music and the walking dead, “Dead and Gone” will undoubtedly catapult you into your deepest, sick-twisted fantasy.