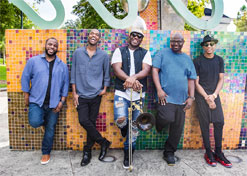 Big Sam’s Funky Nation is making a name for themselves around the country and continues to be a musical tsunami that’s impossible not to root for. Originally from New Orleans, they possess a classic funky spirit and produce a sound that blends jazz, rock, and hip-hop while adding their irrepressible Southern charm. Their sound and visuals effortlessly carry positivity as they symbolically celebrate Mardi Gras all year long. Reinventing what it means to be the life of the party, the dynamic of Big Sam’s Funky Nation is fueled by their vivacious passion.

Big Sam’s Funky Nation is composed of Big Sam on trombone & vocals, Drew “Da Phessah” Baham on trumpet & vocals, Jerry “JBlakk” Henderson on bass, Keenan “Butta Cream” McRae on guitar, Alfred “Sgt Gutta” Jordan on the drums, and Kendrick Marshall on the keys. They are certainly a New Orleans treasure by carrying the classic traditions of Mardi Gras, Bourbon Street, voodoo, Po’ boys, beads, and gumbo. Known for a lengthy list of inspirations, they are all experimental creative visionaries. Throughout the course of their career, they have created six albums, starting in 2004 with the release of Birth Of A Nation. Earlier this year they released their sixth full-length project, Songs in the Key of Funk, Vol. One. Critics have called it the “heart and soul of American culture” with an array of 70’s, 80’s and today’s funk.

The video for the cleverly titled “Pokechop” highlights all the best and fun qualities of Big Sam’s Funky Nation. The video opens with a shot of the band performing with a bright yellow and blue backdrop to match the high energy that the band. Performing with almost every instrument known to man, the Big Sam’s Funky Nation sound is carefully formulated to make you move your body, feel a groove, and let down your hair. Filmed on the streets of their hometown, it visually tells a story and represents New Orleans in its best light. It doesn’t take long for two beautiful girls with even bigger personalities to come into the snapshot. Twerking to the effortlessly funky beat isn’t just for the girls; the party is an open invite and it is celebrated as the night ends and the video fades out.