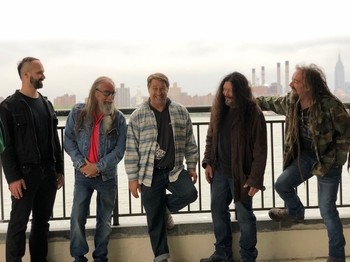 Aussie-American acoustically driven rock ‘n’ roll quintet THE WALK-A-BOUT hail from the artistic East End of Long Island, New York. THE WALK-A-BOUT release their sophomore album THINGS ARE LOOKING UP, produced by Andrew Michael Bertrand and mastered by Roger Lian, in stores and online worldwide on June 15, 2018. The album’s featured single “That’s Just the Way It Goes” with a music video distributed to hundreds of broadcast video channels is premiering today, June 22, on Skope. A limited edition 180-Gram Red Splatter Vinyl is also available exclusively on the band’s website.

The band’s carefully crafted songwriting has allowed THE WALK-A-BOUT to explore the outer reaches of the orchestral atmosphere, and this dynamic new collection explores that avenue with a welcome pop appeal while maintaining their depth and introspection. Members of THE WALK-A-BOUT have worked with the likes of Bill Ortiz (Santana), Vince Welnick (The Tubes, The Grateful Dead), renowned jazz saxophonist David Murray, Earl “Chinna” Smith (Bob Marley and The Wailers), and Grammy winning film composer Alex Wurman. With something in their catalogue for every mood, whether it is a smooth island vibe, a high-stepping funk feel, or straight hard-driving rock, their music is visceral, emotional, fun, and easy.

After self-realized string master Kevin Anderson had composed a growing catalog of guitar vignettes over several years, fate brought him together with Australian singer/songwriter, blues harpist, and didgeridoo player Darren “Sully” Sullivan. Sully was the perfect songwriting partner to translate Kevin’s vision into the lyrical domain, and they began working together in the fall of 2015. At that time, as part of a crew on a ship, Sully penned his lyrics for the material while sailing around the world. He applied his very special brand of wordsmithing, creating imagery for Kevin’s original titles that spanned a wide range of subjects from heartbreak, to soul-searching, adventure, to introspection, to even the simple concept of enjoying being alive, permeating each musical piece with a special energy.

THE WALK-A-BOUT lineup moved closer to completion with a chance introduction to career drummer/producer Drew Bertrand in December 2015. Drew quickly acknowledged the unique nature of Kevin and Sully’s writing and began sculpting arrangements and cadence for every song, carefully recognizing the distinct identity of each piece. As the material coalesced, Drew called on his music business partner Michael Perrotta, multi-instrumentalist and co-owner of Ridge Hill Sound Studios, to come join the sessions and help craft arrangements. He was able to shape the harmonic relationships within each piece in a way that few musicians have such command of doing.

This proved to be the catalyzing factor that led to THE WALK-A-BOUT’s self-titled debut LP, which was recorded and launched independently on April 29th, 2017 on CD, Vinyl, and Digital formats. Recorded at Ridge Hill Sound Studios, the album boasts a multi-faceted exploration of moods, from the hard driving exclamation of the first single “Traveler,” to the introspective depth of “Look at the Moon,” to the funk energy of “Shakin’ It Up,” and beyond. The final track on the record, “Fortune Favors the Brave,” describes the overall message in all its epic grandeur. On August 24th, 2017, THE WALK-A-BOUT released a limited edition 12″ 45RPM single and B-side including the tracks “Drifting Tide” and “Oasis” called The Walk-A-Bout II, also recorded and mixed at Ridge Hill Sound Studios.

Following these first releases, local radio stations had very positive reactions, and it was apparent at any performances that people loved the band’s sound. After a benefit performance for one of the listener-sponsored stations that was airing their music, THE WALK-A-BOUT had yet another chance meeting with Dave Christian, a longtime musician friend of Drew’s. Dave quickly fell in love with their sound; he expressed interest in working together, and without question he was invited to play on the second release. The subsequent sessions proved that Dave’s influence on the sound was exactly what The Walk-A-Bout was looking for. His vocal and electric guitar contributions were ingredients that rounded out the sound on all the material the band had been recording and performing live. Fan reaction to Dave’s contribution has proven to increase the audience-band relationship during any performance to date.

To Purchase or Stream THINGS ARE LOOKING UP : http://smarturl.it/TheWalk-a-Bout

THINGS ARE LOOKING UP is the second album from THE WALK-A-BOUT and was released in stores and online June 15, 2018. The album was primarily conceived in the studio during pre-production, with the songs on the record representing the momentum that the band was feeling during the time. The essence of urgency within the album was derived from the creative process in the studio and the perspective of lead singer Sully, who was back home in Australia at the time penning the lyrics. As the material was developed and tracked, Dave Christian, working with producer Drew Bertrand, offered his contributions to the recordings. This unique way of developing the record is reflected in the undeniable energy of the release.

THE WALK-A-BOUT will tour to support the album along the East and West Coasts throughout 2018, as well as Australia in February 2019.