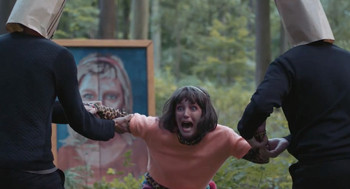 Following the release of his eclectic singles ‘FAMOUS’, and TRAUMA’, UK producer Matthew Wilcock, aka MODEL 86, has unveiled the official video for his latest release ‘I Don’t Give A Fuck What U Say, Which Means I Do.’

The richly electronica-themed production is the final track to be taken from MODEL 86’s ‘I was depressed and anxious for most of my 20s until I came off my tablets’ EP, and utilises a chimed melodic intro, and jaunty synth-focused chords.

Directed by the Palme D’Or winning director Ely Dagher, the official video for ‘I Don’t Give A Fuck What U Say, Which Means I Do’ is the final part in a three-segment trilogy. Premiered through DAZED, the video brings closure to the life of our lead character, who had previously used her painting as portal into a psychologically constructed ulterior dimension.

“The trilogy dives into the psyche of our character who after a rough day fantasises about another life or other lives she could have,” explains Dagher. “Her painted framed portrait comes alive and sucks into a world where she can be different people. We see 4 characters are united in different situations and ecstatic mood where they all bond until the moment comes where it’s time to go back to the real world.”