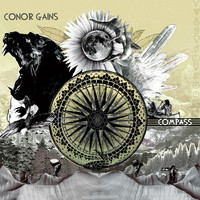 The first solo album from singer/songwriter and musician Conor Gains, Compass, vividly illustrates his full emergence as a potentially once in a generation quality musical artist with the needed durability to leave a legacy behind him given time. Compass reflects the immense growth as both an individual and artist that Gains has experienced over the last three years and his sheer productivity during that period, amounting to nearly one hundred songs, is further reflective of a fecund musical imagination released in full at long last. His influences are obvious, but manifest themselves in a distinctly different fashion from Gains’ contemporaries and peers. Instead of owing a debut to a particular artist or band, Gains’ writing embraces a more all-encompassing debt to jazz and blues that’s likewise thoroughly grounded in the contemporary scene. Compass is not some retro-themed pastiche but, instead, a vivid expression of artistry that’s full of life and vigor.

The arrangement of album opener “I Know” practically slithers, but never in any sort of threatening way. Instead, “I Know” comes off as deep R&B with a strong emphasis on the groove, but Gains mixes a number of different colors into his music. Gains’ debut solo release is chock full of tunes that you can’t pin down – he achieves a stylistic synthesis of sorts in every song and does so without any uncertainty in sound or approach. The powerful imagery behind “Walking Alone” further benefits from his vocal treatment – it’s scarcely possible Gains could be any more spot on than he sounds in the opening thirty seconds of the song. There’s no falling off when the band enters and the drumming, specifically, frames his vocals with just the right amount of sonic drama. The song’s guitar work is elegant, but palpably soulful and features a tasty lead break near the song’s midway point.

“Dance Like It’s Your Birthday”, as the title may imply, has more outright commercial potential than a lot of the other songs on Compass, but never at the expense of pandering to listeners or specific formulas. The crackling guitar work, brash horn section, and effortless verve are completely aimed at providing listeners with a good time and the song succeeds spectacularly in that area. “Ordinary Love” is one of the brightest gems you’ll encounter on Compass as Gains brings off an improbable marriage of jazz, blues, hip hop, and just the right amount of atmospherics without ever sounding like he’s straining for something just out of reach. “In My Head” has an unsettled air, intense yet as soulful as ever, and brings his blues influences out in a more overt way than many of the album’s other tracks.

“Miracle” is the longest tune on Compass and has an inward looking mood quite unlike anything else on the album. When the song’s minor key blues melody makes itself felt for the first time, we can feel the aforementioned mood settling over the song like night darkening daylight’s final rays. Gains’ singing goes deeper here than ever before and achieves a rare level of intimacy even when the song ramps up a couple of minutes in. Dynamics are key to why this song works so well and there’s not a misstep to be heard. Conor Gains’ solo journey couldn’t be off to a better start than we hear with Compass.