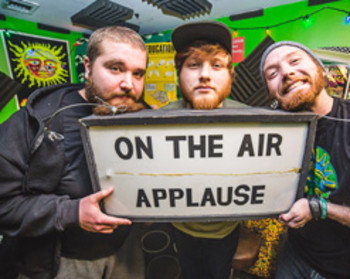 It’s time to get educated boys and girls! Based out of College Park, MD, Higher Education is a fun-loving reggae/rock trio made up of brothers, Petey and Danny Devaney on the guitars, bass and vocals, and Bradley Wilson on drums. Since 2010 they’ve independently released three studio albums, Chasing Highs, Would You Like Fries With That, and The Ballad of Alexander Henry. Their new feel-good single, “Gift Called Life” is the title track off their forthcoming fourth album, serving as the perfect introduction to the band’s classic reggae sensibilities and psychedelic rock fusion.

Petey Devaney opens “Gift Called Life” with an up-beat groove on the guitar, opening the floor for Wilson to get people dancing on the drums. Some layered percussion instruments add a bit of an island vibe to the mix in anticipation of Devaney’s rich vocals. Although the song is lighthearted in nature, it holds a deep meaning to the band because it was written in the wake of the Devaney’s father’s tragic passing. Petey aimed to capture the positivism that his father brought to the band as their biggest supporter and inspiration. This inspirational pop gem, while honoring the fragility of life, acknowledges that every day should be celebrated because to have life at all is truly a gift.

Filmed and edited by Zach Strouse of Positive Vibe Media, the music video for “Gift Called Life” takes place at Greenbelt Lake, a local spot where the HE crew has been hanging out since they were kids. It takes on a truly wholesome narrative filled with friends and family, from fellow musicians and producers to family members, each person depicted in these lakeside shots has an immense effect in the framework of Higher Education. Strouse’s shots are blessed with sunlight as he captures the crew dancing along the lake, simply celebrating their “Gift Called Life.”