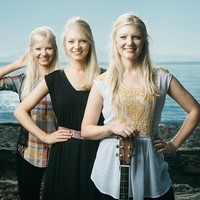 Hitting the streets of their hometown – Edmonds, Washington – in 2006, The Gothard Sisters first began playing together as a violin trio busking for tips at the local farmer’s market, working their way onto stages at local fairs and festivals. In December 2016 The Gothard Sisters charted on Billboard’s World Music Chart with their latest Christmas album, Falling Snow, alongside notable Irish music phenomena Celtic Woman and Celtic Thunder. Jumping ahead to 2018 in the ever-changing musical landscape they bring their talents together again for the new album by this Pacific Northwest trio, entitled – Midnight Sun.

This album was written on the road while touring, with several songs being about their adventures in the U.S., Europe, the Mediterranean and the Panama Canal, including the opening cut. The title track opens the set with “Midnight Sun” to make an instant strike at the overall point of the album. The first thing you notice is how well produced the sound is, and the Gothard sisters, Greta, Willow and Solana, do the honors with their mazing voices. Rest assured, this is world class string and vocal oriented folk music at its finest in what today offers up. One listen and it’s over, you know it’s going to be high standards throughout.

The next track “Against The Grain” is a fantastic instrumental that showcases their musical prowess, aside from their great voices. It’s a string-oriented masterwork you can’t deny the powers of. It’s followed by “Wandering” which is another travel song. As the lyrics say, “every new place has its very own song” and that’s part of the whole positive vibe of these tracks. It’s another spot-on track that is undeniably well-crafted. “Hummingbird” is also from their travels and it’s another killer instrumental track that flies every which direction with a musical-  assault on the senses.

By the time “Mermaids” rings through the stereo, you’re completely captivated by these three first class musicians. It really picks up in the mid-section with a rumbling charm before the song takes you out with some more fabulous lyrics and instrumentation. On “Elderflower March” they the listener back on their journey of travels with another instrumental of colossal proportion. It’s a beautiful listening experience and one of the stand-out instrumentals on the album. You just can’t escape the quality they bring to every aspect of that they do. It’s worth the price of admission alone.

“Bells On The Hill” is a completely different thing altogether, as they take things up a notch in every department. This track is one is not to me missed in the collection. It’s about a sailor coming home from sea, and you can get the idea just by the title that it’s going to be a heartfelt song, and it is a wonderful point on the album. “Cat And The Fiddle” comes along just in time to spice things up right, and the sisters once again dazzle with their elegant voices. There’s also “When The Rain Falls” ft. pianist, Michele McLaughlin, which is a sublime treat, and a few others that all stack up evenly on this truly masterful album.