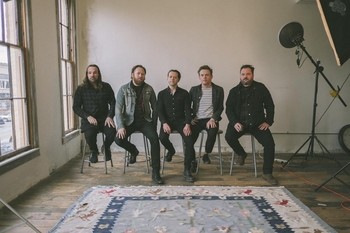 Correspondingly while the band’s early releases were written while the band members were entering their twenties, Kicker sees them in their forties, and the songs show a perspective that can only be learned from experience. The Get Up Kids have never been afraid to try something new, but the songs here — recorded over the course of the last year at Fire and Ice studio in Baldwin, Kansas — mark a full-circle breakthrough for the band. Upbeat opener “Maybe” reintroduces The Get Up Kids in spectacular fashion with fuzzed-out guitars, chiming keyboards, and Pryor’s distinctive cadence singing about the relational dynamics he’s learned over time.

The name of the EP is a reference to their foosball obsession — which dates back to their first European tour and is still played in their current practice space — but also serves to sum up the overarching concept of these four songs. “You always look back in rose colored glasses, and I always remember when this band was really struggling and we were selling our CD collections to pay our rent and that sucked at the time, but looking back that was an amazing time, that was so much fun. There was no pressure or anything,” explains Suptic. Kicker retains that carefree idealism — capturing the fresh urgency of their most revered releases — while proving that their journey is still unfolding. The Get Up Kids may have grown up but they haven’t become jaded.