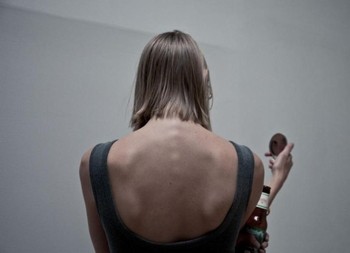 The Bad Metaphors EP produced by Shawn Everett (The War on Drugs, Alabama Shakes) consists of three rebellious break-up anthems inspired by past relationships. With an urgency reminiscent of The White Stripes and PJ Harvey, you’d never guess that Elke (pronounced “el-key”) first started her musical journey wanting to be a pop star. Raised on a mix of Top 40, classic rock and doo-wop, Kayla hung out in some different alleys, from synth-heavy pop to country to shoegaze, before she started singing louder, finding her distinct tone and, eventually, the confidence to match.

Raised in different cities and small towns around the United States, Graninger dropped out of boarding school and moved to New York in her late teens, where she signed to a modeling agency, failed at that, and then hung around until Elke arranged itself around her.

The hip-swaying lead single “Without the I” is an introduction to her musical world, which she explains is “An exploration of memories and moments that I needed to make sense of.” “Two Lives,” a crooning folk-rock hybrid, and “Black and Blue,” the EP’s dark, building finale, further explore the destructive nature of lost love and fading relationships. “I really have owned the fact that I kind of sound like a man,” Graninger, whose main inspiration is to show her family the importance of individuality, says. “I didn’t do that for a really long time. Now I have this and I can be really loud, and the songs are super emotion-filled with the way that I sing. That’s what I hold closest.”