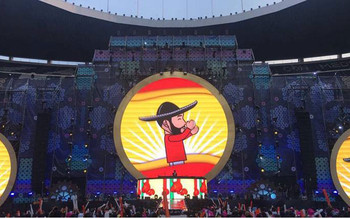 With multiple international hits over his belt and over 500 million digital streams, British superstar Jax Jones once again cements his role as one of this generation’s most talented DJs. Yesterday he visited Mexico for the first time to perform at the second World Dance Music Radio Awards at the legendary Estadio Azteca. Charged with infectious energy, dazzling visuals and a heavy dose of hits like “You Don’t Know Me,” “Instruction” , and his own remix of the global smash “Bum Bum Tam Tam,” his set was a knockout that had fans dancing from start to finish. One notable favorite was his recent single “Breathe” featuring Ina Wroldsen, which has dominated anglo radio in Mexico as #1, and has topped the weekly charts in the UK. With more than 70 million digital streams and more than 47 million views on YouTube, “Breathe” is shaping up as one of the songs of the season – and one of the most Shazamed tracks in Mexico, U.K. and Germany, among other countries.

At the WDM Awards, Jax Jones was crowned as this year’s Best New Talent.