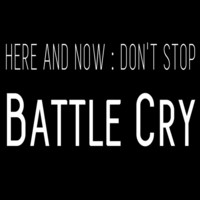 Christian Rock finds its roots back in 1960 when some Christian metal artist bands started gaining commercial success. ‘’Here and Now Don’t Stop” is a new rock band based in Hillsboro, Ohio, who has recreated the magic of Christian rock with their very first released single track ‘Battle Cry’ with Thermal Entertainment, from their first full-length album to be released in 2018.

‘Here and Now Don’t Stop’ is a band masterminded by talented bassist Jason Burn and trained singer James Scott who had first met with Jason’s daughter’s music lessons. Later they joined to open a music school and recording studio in Hillsboro, Ohio. Shortly after that, they started playing as a part of the worship team in a Church, Good New Gathering, along with James’s long-time friend and guitarist Dawson Barreras and the drummer Nick Davis. ‘Here and Now Don’t Stop’ emphasizes on contemporary Christian rock music with explicit lyrics influenced by country or gospel music.

The song ‘Battle Cry’ captures the imagination of the listener from the very beginning with its pleasant pulsating drum section by Nick Davis and the strong stranded guitar chords by Jason Burns. The melodious vocal prelude by James Scott and Spencer Jones takes the song on a role much before Scott’s mouths the starting lyrics.

Being a song from the Christian rock genre, the lyrical section clearly depicts an influence of their profound desire to be witnesses of Christ and their own personal testimony about the savior through this beautiful musical journey of storytelling.

The resonating rich drum beats with an impressive guitar arrangement solely intoxicates the audience into an intriguing and exciting ethereal as the chorus keeps returning back with more and more vigor creating a distinct raw energy throughout the song.

James sings ‘I know you are listening, Jesus forgave me, Save me from my sin,’ in his own distinctive, warm and soulful voice as the song gracefully melts through the impressive verses and creative instrumental arrangement.

‘System is just to beat yourself to destruction,’ is another instance when James impresses his audience with his clear yet powerful voice structure. This lyrical section is simple yet effectively covers the pain of irresistible destruction in life and also highlights the incredible solace when a heart bestows all its trust on the Lord who shows his remarkable powers to endure the pain and return back to serenity.

Though ‘Battle Cry’ is a hardcore rock song with heavy instruments yet the voice quality of the song is kept warm and rich which ensures the song retains its mesmerizing effect quite long even after the song has ended.

Though ‘Here and Now Don’t Stop’, is a newly formed band and ‘Battle Cry’ is their debut release, the song clearly portrays the proficiency of each of the members in the group. With a heart-warming lyrical section and equally balanced and accomplished musical arrangement, the song does take the Christian rock genre to a quite few high notch. James tuneful melodious voice too is sure to charm a lot of rock music lovers with this single release.