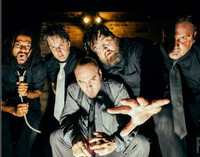 A Killer’s Confession pummels the listener with an all-engrossing sound on “Angel on the Outside”. Effortlessly merging metal and hard rock into a satisfying whole, the track barrels through with such bombast. Volume is an absolute must for “Angel on the Outside” deserves to be felt as much as heard, packed with a tremendous amount of energy and spirit. Riffs ring out with a glossy metallic sheen. Drums help to drive the piece forward as they have an infectious, anthem-like quality to them. Within the tremendous amount of power that A Killer’s Confession taps into they manage to make space for softer, more reflective atmospheres within the tremendous stately atmosphere. Lyrics have a thoughtful, reflective quality to them while they focus upon the innermost thoughts and desires, those which truly define a person.

Right from the beginning the way the track comes into focus with hints of post-rock adds to its emotionally charged quality. Upon the drums truly coming into the mix the piece delves into a nearly naturalistic aura, showing off its undeniable power. Layer upon layer come into the mix, as the guitars show off their impressive chops. Nicely able to veer between full-on wall of sound alongside most poetic impulses, they simply stun with their attention to detail. Over the course of the track things build up until the absolute fevered pitch of the finale.

Timeless and tasteful, A Killer’s Confession taps into a spirit of defiance on the rousing “Angel on the Outside”.