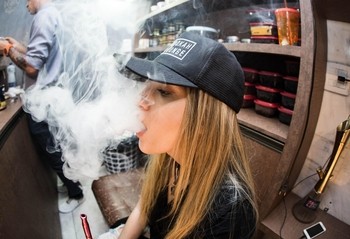 Marlboro’s cowboy and Camel’s Joe Camel were symbols for other generations. Likewise, vaping has become a symbol for millennials. This new form of smoking, where you inhale vapor out of an electrically powered device, has only been around for a decade or so. This means most people are uninformed as to what vaping is, and the health effects of vaping. Luckily, in recent years researchers have conducted tests that have given us a better understanding of how vaping works.When you smoke a cigarette, combustion allows for smoke which you then inhale. Vaping does not need combustion, instead there is a chamber that turns either a dry herb or a liquid into vapor. Vapor is the name given to a gas that is suspended in the air after changing from either a liquid or a solid. On the surface, that makes vaping sound safer than smoking. But is it really?

The Harmful Effects of Smoking

The danger with smoking doesn’t end there. There is also a high risk of material fires. From flicking the ash off the end of the cigarette, to putting the tobacco out, flaming material often comes in contact with the environment around it. This is an obvious fire hazard!

In 2011 alone, United States Fire Departments estimated there were 90,000 fires related to smoking, 540 people died as a result of those fires, and $621 million dollars worth of damage resulted from these fires.

As you can tell, there are a lot of harmful effects of smoking. It even does additional harm to those around in the form of secondhand smoke. This leads to the question: Is vaping safer?

The Effects of Vaporizing

As explained earlier, combustion is the main cause of carcinogens in smoking tobacco. Because vaping removes the act of combustion, less carcinogens are in the vapor. However, this does not mean that vapor is carcinogen free. Most e-liquids, the material used to create the vapor, contain nicotine. This is a carcinogen and remains a carcinogen when vaped. There are forms of e-liquid that do not contain nicotine. While these e-liquids will still have some carcinogens, i.e. Propylene Glycol (vegetable oil) and Acetaldehyde, the list of carcinogens in e-liquids is a fraction of the amount in smoking tobacco. So while not healthy, vaping is a healthier alternative to smoking tobacco.Just like tobacco has dangers outside of inhaling the smoke, vaping has some dangers outside of inhaling the vapor. The biggest danger is exploding batteries. Vapes are normally made up of three parts, the battery, the atomizer, and the main console. The battery is what gives power to the device, the atomizer is where you put the e-liquids and where it gets turned into vapor, and the main console connects those devices. The most dangerous part is the battery!

One interesting piece of information to note is that after 2015, the explosions became more dangerous. This is because as the market for vaporizers grew, so did the battery size in company’s efforts to outdo each other. The bigger the battery, the more dangerous the explosion. However, companies have also developed ways to make batteries safer now that more studies have been done on vaporizers. So while we saw an increase in damages from fires in the last two years, expect those numbers to go down now that we have more information about the cause of them.

Approximately 88% of the smoke when you smoke marijuana contains non-cannabinoid chemicals. When you vape marijuana, 95% of the vapor consist of cannabinoids. So when you vape you are getting close to only inhaling cannabinoids, while smoking you are inhaling more non-cannabinoids than you are inhaling cannabinoids. For this reason, vaping is often seen as a safer alternative, specifically for the elderly who are using it medicinally. For many of those who want to learn more about vaporizers, click here to read about vaporizer reviews. If you’re going to get started with vaping it’s important to educate yourself before making a purchase.

Before you make this decision, you will want to know what the law in your area is for tobacco, vaping, and marijuana. Once you know what you can legally do, most researchers and scientists will agree that vaping is the much healthier choice. But ultimately, it comes down to preference. Some people just prefer smoke to vapor. However, if your health is your biggest concern, vaping is your best option.