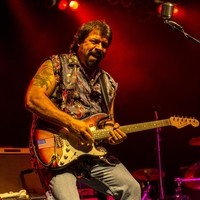 The two latest singles from New York City based trio Phil Varca and the SlamJammers, “Cash” and “Don’t Push Me”, are the best recordings yet capturing the gloriously raw live sound and energy this blues inspired three piece are capable of generating for a crowd. Replicating a band’s live sound and performance velocity in studio recordings is seldom a winning proposition – Varca and his band mates achieve it here, however, with a direct approach grabbing the listener by their figurative lapels and shaking them to life. They are obviously a well honed act with strong songwriting to buttress their performing talents and Varca is a more than convincing vocalist. This is certainly cut from a familiar cloth for fans of blues and blues rock, but never seems unduly imitative. Phil Varca and The SlamJammers abide by one of the central requirements for crafting memorable music in this vein – they bring something of themselves to the style and it makes for a fresh listening experience.

“Cash” has a brisk tempo and sinewy, soulful guitar work from Varca. Their three piece configuration means the band always maintains an uncluttered musical attack and this song manages to come down on the heavier side of the ledger without ever striking a single ponderous note. It certainly occupies a traditional slot in the genre but, despite that familiarity and Varca’s obvious musical influences, the song comes off as a fresh offering thanks to Varca and the SlamJammers’ ability to bring something of themselves to the performance and subject matter. The song construction is solid, though some might find themselves wishing that the chorus provided a more clear cut climatic moment than what it does – it is satisfying, to a point, but also seems like a squandered opportunity. The track, however, is tailored to an ideal length and retains its paunchiness throughout.

Varca shows off his Stevie Ray Vaughn influence more clearly than ever with the second song “Don’t Push Me”. It settles the tempo down compared to the aforementioned tune and hits on a nicely funky groove without ever getting too far away from the three piece’s bluesy roots. It’s the strongest of the two tracks in the sense that there’s much more at stake with this number and Varca really gets over the disgusted, fed up feelings of the lyric with listeners in the most effective manner possible. His voice, full of gravel and accusation, is perfect for this sort of song and he plays it just right as a singer. Both of these singles present distinctly different levels of energy but they are brought together by an unity of sound and get across what Phil Varca and the SlamJammers are capable of in the best manner imaginable. “Cash” and “Don’t Push Me” are excellent modern blues rockers and Varca, along with his band mates, seem poised to carry on this music for another three decades.