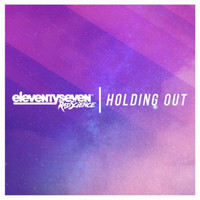 After breaking up in 2014, South Carolina pop band Eleventyseven is back with their new album, Rad Science, that’s coming out on November 7th. Their single from the album, “Holding Out,” is a deeply relatable millenial anthem. Eleventyseven is a fun band that delivers great pop tunes with electronic undertones- classified as neon punk, they have cultivated their sound into something more polished, but it still remains true to the band. Eleventyseven is made up of Matt Langston and Davey Davenport.

“Holding Out” is basically about how millennials are under a hell of a lot of pressure and it’s become a mess to get… well, anywhere at this point. Every lyric is a sentiment shared by most of my peers and myself. Normally the obvious ploy to relate to this demographic would be annoying, but they get it and that makes it feel more like a justification than anything else. Yeah, it’s a pain to be in this part of your life when everyone’s closing in on you and your future seems like a hopeless pipe dream that a younger, more naive version of yourself actually thought could happen.

While it’s not a particularly positive track, “Holding Out” is brutally honest. The lyrics are clever and flow very well together, and this is an absolutely earworm-worthy track (it’s been stuck in my head since I first listened). The music itself is upbeat and fun, which fits the Eleventyseven brand perfectly. I was relieved to find that they didn’t change their sound too much, but improved from a stereotypical 00’s ‘quirky’ sound to something that feels more more professional and put together, without losing the charm that brought fans to them in the first place.

I’ve known of Eleventyseven for about a decade now, though I only really followed their work when I was a teenager. Their sound was cute, interesting, and provided a way for me to branch out of the strict ‘country only’ rule in my home- yes, my family had one of those. It was weird and mildly surreal, looking back. Eleventyseven’s album Adventures in Eville was one of the first I ever experienced on my own, without any pestering from relatives about what ‘real music’ was. It was exactly what I needed and for that they have a special place in my heart. Hearing “Holding Out” and seeing that they’re back at it and coming out with music that brought a wave of nostalgia without sounding like they stepped right out of 2010 is really great.

If you’re a fan of fun pop and/or are looking for a relatable song to sing out your frustrations to, I’d suggest you give “Holding Out” a listen. Eleventyseven is an entertaining band that gives a great performance. I’m very glad they’re back again to make more music, and I hope it doesn’t end any time soon! If “Holding Out” is any indication, Rad Science is going to be a fantastic album full of memorable and fun songs to brighten your day.