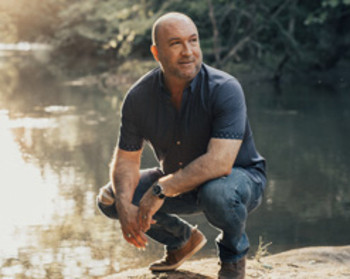 John Tracy is a singer-songwriter who brings a refreshing calmness, perspective and profound connection to his listener’s lives. His folk rock-influenced music is moving, unique, and decidedly human. At the chilliest time of the year, John Tracy is here to warm us up like crackling logs in a fireplace with an uplifting music video to accompany his rendition of the Christmas classic, “Silent Night”.

Using the mantra, “real music for real life”, Tracy has been deeply connecting with audiences for over a decade. His summertime smash, “Midnight Moon” featured a nature-inspired music video evaluating the bigger picture when life is bringing you down. Following the same mantra, Tracy has become a renaissance man of entertainment in his own right. Aside from music, Tracy is also the author of the published book, Of Life, Love and Family. Creating variety by releasing different types of media assures that the message, sage wisdom and life experience of John Tracy reaches people in every wheelhouse.

“Silent Night” is a song that has been covered and reproduced thousands of times since its original composition by Austrian composer Franz Xaver Guber in 1818. The everlasting sentiment has made the song a Christmas essential every year when December rolls around, and John Tracy’s original take on the holiday classic has become the favored rendition by both the secular and religious all over the world. His warm baritone vocals hug the listener’s ears in a warm embrace as his acoustic guitar dances with heavenly orchestral strings and a sublime electric guitar.