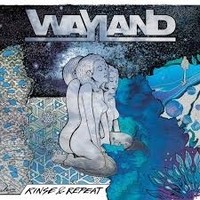 Wayland is not exactly a new band. The band was originally signed to a record label that was owned by Keifer Sutherland, called Iron Works. The current release is their first full length release with Mighty Loud / InGrooves. Mighty Loud label is owned by Jesse James Dupree.

First off, Wayland is a rock and roll band and the album features a lot of different rock tunes, some slow and mellow, others fiery and traditional. For old rock fans, there’s enough songs here to keep you hooked on to scream your lungs hard to. One of my personal favorites is Through The Fire, a fast-paced delight that would keep you grooving till fade. You can tell that Wayland has a strong influence from popular rock legends like Jon Bon Jovi. The song was the album’s first single and it is the exact type of rock music that trends nowadays online and in the industry.

The quartet show a versatility that belies their longevity and you can easily tell that the chemistry is real from Mitch Arnold’s vocal prowess with high notes and belting tunes to the guitar chords from Philip Vilenski and the drums and bass too. Having performed more than 500 road shows together, their cohesion and blend is visible in the songs. Credit must also be given to the band for the strong lyrical content of the Rinse & Repeat. The album is hard to peg in a box as you can identify so many different sound profiles in the album that will help you flow and ebb through the tunes.

“All Rise” is perhaps one of the best songs on the album, a soulful ballad that calls the listeners to action. You get a sample of modern rock in “All We Had”, a sad love song about trying hard to make life and love work. Mitch Arnold also puts in an enviable vocal performance to beautiful lyrics that are backed up by his colleagues with top-notch guitar and bass performances.

Another song to watch out for on the album is “Shopping for a Savior” which heralds back to the 70’s grooves. It is a departure from some of the modern rock that you find on the album too and does a lot to satisfy a diverse audience. Wayland is currently on tour and if you have a chance to, you should experience them live.

In conclusion, this is an album that you cannot easily classify and while that sometimes is a bad thing, in Wayland’s case, it is a testament to their strength of catalogue and musical diversity. Do yourself a favor and pick up a copy of this album and you will be glad you did. Add a few friends and a pack of light beer and you’re in for a true rock party befitting of several popular rock bands.