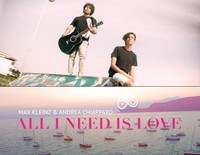 Italiano Andrea Chiapparo whose 16 year old stature won’t deny his singing abilities and or skills, for he will release his debut EP “Love” in 2018. But before that happens he has gone on to write and record a song he calls “All I Need Is Love”, whose title of wording may be familiar to some, as they have been used on other songs prior. But this track in particular is different in more ways than just one of course.

“All I Need Is Love” not only has singer Andrea behind the vocalization but a guest spot from producer Max Kleinz, whose won a golden disc back in 2010, and is the founder of Cosmophonix, living in Italy but is from Brazil. Both he and Andrea has come together for this song to make it something very unique and original.

Not only is this song released as a single but as a video as well, but this song turned video came out to be precise video quality that is very impressive to the eyes and ears and professional if at that as well. It takes the actors and musicians involved to help set the mood of the song, as interludes of brief romantic scenes settle in as the video plays off, incorporating some incredible views of the sky and ocean scenery.

The song itself brings out this classic style of the 90’s era, having such a unique source of beat and rhythm that makes you want to dance along. It has this bright happy going tone to it. One of those tracks and videos to enjoy out in the summer time or on a hot day, it brings the coolness down to keep it chill and fun.

As far as Andrea and Max go in terms of musicians and singers, well Max the guest featured on this track does a fairly decent job, as his vocal chords reach a deep yet meaningful surrounding to the music itself. Whereas the main singer of the track Andrea captures the essence and mood of the track, as his own vocal style is very soothing yet pop feeling. It becomes more of a pop meet R&B somewhat slightly when listening in to the two really. Producing wise done by Max is hands down great quality and sound overall.

The song in general really brings it altogether, while the video version just keeps it altogether, making it all hold itself together to be something truly great. That is really how this track works out, it makes everything work, in terms of the quality, style, sound, and music. Lots of soothing music with upbeat tones that makes it just lots of fun.

“All I Need Is Love”, may have been some familiar words brought to you by other sources, but they belong to the titling of this track. It brings out the real meaning of romance, love, and care. Showcasing those feelings to someone, your partner or a loved one like your family or a friend. Love is so much to so many people, that only Andrea and Max can bring it ever so closer with a track such as this one.