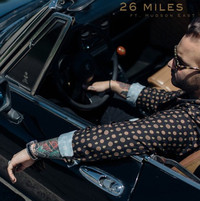 The time of the party person. Partying it up every day and night for some if not others who par take in it every so often, it becomes a part of them. So much so that it is hard for them to ignore or refuse it at times. “26 Miles”, was born in this matter, for it was three years ago, Michael McQuaid was going through what many would call a “party boy” phase but his was severe. Him being hung over time and time again, after long nights, that he would pass up on meeting up with that one unbelievable girl to date even. So he would nurse himself back to health and reality for that matter with his music. Which is why “26 Miles” exists.

As it would have it though, one of the apparent Tinder dates, did land in Michael’s favor, as Jasmine would consider rescheduling the date for the both of them to meet. So it would go on that “26 Miles”, would be lost to the times of then to an old notebook, as the two would blossom into a relationship. Jasmine being a stylish and fashion blogger, had her life together and had tamed Michael during their time together, dating and relationship status. As the couple would move in together just las year in fact, Michael would come across the song within that old notebook, within its lyrics he had realized of seeing the song through. Once gathered together he would find a U.K. gent Hudson East, a rapper who would agree to appear as a guest on the track that is “26 Miles”.

Michael McQuaid on “26 Miles” – “When I’m in the car and that gas light hits, I wait until the last possible minute. I’ve figured out I can drive about 30 miles until I run out. Why do we do that?! It’s about those late night texts, when you wanna go see your girl and you’re car is JUST passed empty. But that doesn’t stop you. ‘I’d ride 26 miles on E to come and see you’. This song is all about the vibe. I want people to drive in their car, all the windows down, with no gas in their car, blasting this song and on their way to go see someone special.”

So with all of that said and to be the truth of the matter, “26 Miles”, sounds decent. At least decent enough. In terms of the sound it is R&B mixed with hip hop with the extra addition of rap thrown in for good measure. You end up with a track that sounds slightly similar to that of Drake’s work. Same type of form with melodies and harmonies, and the rhythms of the beats. Simply, it is likely one of those tracks you could hear being played within a club setting, or even a dance at a middle or high school atmosphere perhaps. That is what the vibe gives off for this particular track.

All in all though, Michael McQuaid’s “26 Miles”, is a track that was in a process to be fulfilled. Which it was, ending up as a track that could delight the senses, with different vibrations to the variations of the mixed genres said up above.