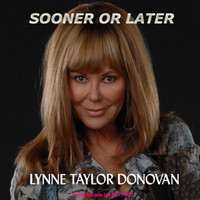 After the long wait by her fans, Lynne Taylor Donovan has finally released her new single, ‘Sooner or Later.’ This is the third single track coming from the Nashville Sessions following the European hit songs ‘Strong One’ and ‘Am I Dreaming.’ The song, released on September 1st, 2017 has since begun hitting the airwaves making it one of her most favorite songs yet.

The song, written by Hobo, Kim Tribble, and Vasos tells a love story of a man hiding certain truths from his lady. The message passed across is from a third party warning the woman in the relationship that she would find out some things about the man sooner or later. The elder observer lady cautions that despite knowing that there is an impending danger, the man would end up hurting the girl’s feelings in the end.

The message of the song is delivered through the artist’s firm tone and exceptional vocals. Her vocals are accompanied by a variety of instruments that make up the smooth melody of the song. The blend of the violin, the acoustic guitar, and the bass guitar serve the purpose of creating the mellow mood that the song is sung.

This song appropriate for several events. The chorus of the song would bring listeners to their feet dancing to the country pop beat. The violins make the song appropriate for a subtle, slow dance, suitable for a dinner or the background music in an art gala. The song could also fit the restaurant setting as it creates the right ambiance for dining and conversation in an elegant setting.

Judging from her past tracks from Nashville, Lynne has outdone herself sounding better than she has previously. The song is not her typical style of singing, but this new twist to her style adds a fresh and captivating feel to the artist.