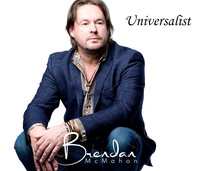 Music is an adrenaline flowing like blood in our soul. When we listen to great songs, our spirits are quickened; Brendan McMahon’s Universalist is one of such great jewels that should never be removed from your playlist. Brendan who released his last album Marker 7-58 under his band name, Satellite Gods, played a mental game by keeping the track that bears that name from the album. Who knew he had such a surprise for us in Universalist?

What is mostly needed on a collection of songs is the gentle spirit of a good one that leads the ear to an overflow of beautiful verses. Marker 7-58 was just the right song; it tells that there is a link between his last album and this EP. That link may never be broken in collections to come too because he took into the muse of a park reserve located near where he recorded his music to describe the events of one day in his life as he enjoys the view from the top of the hill on that pack.
Brendan who plays rock, alternative and other genres opened Universalist EP with this calm Ode. The electric guitar flowed in all righteousness, and each string pulled were spiritual enough to explain what Brendan may have seen from that view. The powerful lines of Marker 7-58 displayed McMahon’s writing ability as mature, deep and insightful, giving the track the needed emotions and depth. As I listened in, I took my book and wrote a poem about places I’ve never been. Brendan is a singer that connects with his listeners; he shoves in everything he has.

Universalist EP dissolved quickly into the next track, Hotel Hemmingway. Brendon infused a lot of energy on this one. He didn’t wait to breathe; instead, he gave the piece of gold life with “Rock n Roll.” One thing I enjoy in Brendan McMahon’s music, as he took me to the rooftop each time I re-listened, is his voice. It sounds like the lonely call of a lost child in a hidden cave. Hotel Hemmingway leads into Fridays in December.

Since Brendan’s first solo release in March 2015, he has carved his style and path for himself. Constantly moving his pace into an international act, he was recorded with some leading musicians in Australia including The Angels, Baby Animals, and of course, the Little River Band. His third track, Fridays in December cut loose with the Australian connection as he went deep root with his Celtic influence. The song has a great feel that poses the truth that Brendan has been listening and maybe studying Celtic music, or maybe this is just his style. Brendan McMahon used “Fridays in December” to express the anticipation of Christmas. His lyrics had total funkiness and vibe. Fridays in December is just the right song for the air-waves.

When I listen to songs, I am usually particular about the emotional content, the delivery and the depth that comes with the lyrics. “Mother” is the 4th track in the Universalist EP and is more like the highlight of the whole collection. Brendan tossed all the energy down and settled at home as he said thank you to his mother. He played with nostalgia, remembering how his mother held him in safety and love. When I was young, my mother would hold me as we walked down the block. “Mother’s” love is one spectacular love we should not miss while growing up. McMahon wrote this song for a goddess. The spirituality of the keyboard lingers in my head. Universalist EP is being promoted with this single, “Mother.” I think Brendan knows how to appeal to the emotions of his audience, his pitch was particularly endearing in this piece that he gave a grand piano exit.

Universalist was given a “Beat” closure. Good song, for the vibe and the technicality of the Rock and Roll which was at the climax of this piece of work. The electric guitar, which leads the protest of sound did in grand style making the effectual display of the Rockstar-ness in McMahon. Although I was not expecting such a closure (probably because I wanted more than I got), this song has its audience.

The Universalist, as he called this EP, showed that Brendan is indeed universal as he stuttered from one genre to the other in just five tracks. Indeed it is a successful one, and I am on the lookout for his next piece of work.