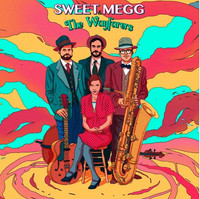 The roaring twenties a time of jazz, booze, and well dressed men and ladies of that time era and period. It was a classy time and for Sweet Megg & The Wayfarers, they just want to bring it all back once more. How so, well they will be doing so, with the release of their debut single ”

“Here Comes the Man with The Jive”, off their debut self-titled album, were they create music that people can relate to. Been inspired by not just the period and time of the twenties but the music scene behind it as well. The blues, gypsy, jazz, country, and jazz of the modern era of then and now, takes a sound that a band such as this, has truly made as their very own. It is vibrant, modern, and eclectic, that honors the great music of the past, both the greats and everyone else in-between.

That said, “Here Comes the Man with The Jive”, is not only the debut single for this band’s self-titled album, but just to happens to be the kick starter to this album altogether. For it takes the genres described above, enhancing them, by bringing back what once was that is new again. Literally hearing this track really takes you to that time and period pace. You hear the horns of the jazzy side, with the blues gypsy country side, coming right in to mix it up. It creates a modernized track that keeps it hot and groovy!

It is more like one of those tracks you could play at a party of even live at a concert setting in front of an audience, it will take away with its amusement of fun and thrills, by just the music alone. It even goes as far as mentioning that Stuff Smith the writer behind this track, was one of jazz music’s most preeminent violinists of the swing era. This being one of those anthems of the marijuana enthusiasts of the twenties. Referring to themselves simply as “Vipers”. So a little insight back story for you behind this particular track that is really getting the buzz going for Sweet Megg & The Wayfarers.

As for the rest of the tracks off this self-titled album, there are quite a few that make the rounds of a replay option. Like take for instance such as “Jitterbug Waltz”, a more easy going yet easy listening experience that captures the flow and essence of the twenties even more so than the opening track had done. It is as if this track was built upon the opener, creating a continuation effect that keeps it all moving along as it were.

“Dinah”, is another one of those twenties classy tracks, that keeps it all hot and moving. It has this upbeat attraction of tone, that keeps the music bouncy and very in tune with the music. The vocals and instrumentals all really working together to create a passion of pride and progression. Whereas such tracks as “Too Hot For Woords” and “You Let Me Down”, allow for the harmonies and melodies to be more creative and fulfilling.

When it comes down to it, it is just one of those albums, by an act that can create from the past into the present. Yet they stay true to being themselves in every way possible due to the music at hand. Sweet Megg & The Wayfarers is that act, who take the jazzy routes of the classy time that was into the time of the here and now.