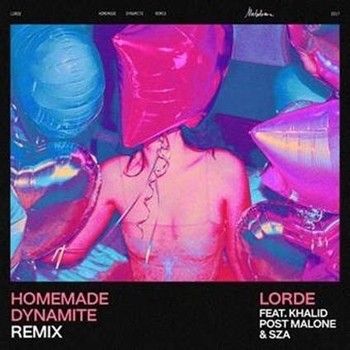 With help from tourmate Khalid as well Post Malone and SZA, LORDE today unveils the official remix to her latest single “Homemade Dynamite.” The star-studded remix, with the original “Homemade Dynamite” amassing over 50 million streams, arrives just ahead of her Melodrama World Tour debut in the UK on September 26th, when the singer kicks off a cross-continent run through Europe, Australia and New Zealand with support from Khalid. The remix to “Homemade Dynamite” features three of 2017’s biggest breakout acts and is available to stream/download across all digital service providers now.

Lorde has been heating up festival stages all season, with acclaimed performances at Coachella, Governors Ball, Bonnaroo, Glastonbury, Lollapalooza and Outside Lands. She’ll continue to gear up for her Melodrama World Tour with upcoming sets in Las Vegas, NV at Life Is Beautiful and iHeartRadio Music Festival. The singer’s North American dates are set for March 2018, kicking off in Milwaukee, WI and heading to 30 stops across the US and Canada before its finale in Nashville, TN.