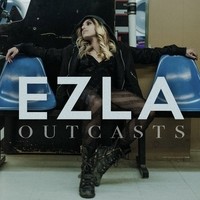 EZLA creates a twist on pop music with the song Outcast. The song is about the struggles of fitting in. It’s also about not sacrificing who you really are to find out where you fit into the world. The twist with this song comes into play with her clever vocals, they add a layer of darkness that most pop songs don’t have. Also the electronic instrumentals make for an even grittier vibe. This additional layer works well for the song and makes it more interesting than a typical song. The twist also makes the music more enjoyable to listen to.

The style of the cover is simple. A picture of her leaning back on a blue plastic seat that looks like is in a subway. To be comfortable in that type of public environment is something which most people cannot achieve. The picture suits the song because the feeling of being comfortable with your-self carries over to the song. Also her outfit on the cover is all black with combat boots, black nail polish and a hoodie. This is very much the style of someone who rebels against the norm, someone who wouldn’t mind being a little different which is definitely being conveyed in the song.

The song Outcasts is pop in genre and catchy. Also it has a great message about the feeling of tiredness that comes with putting on a false front for certain types of people who are themselves fake. Through the song she is encouraging them to leave this fake group, friend, or whoever it may be and befriend those who do not put on a tiresome front. To befriend the outcasts who also make for more interesting company. Also, perhaps they are more fun, because she also mentions alcohol in the song and the parties that the outcasts throw.

The song Outcasts a the beginning for the band and is EZLA’s own writing. She began her career by moving to Nashville, TN. There she started to create her own style of music. The sound of the music is whimsical with electronic sounds mixed with other instruments, matching the message of this song, which uses the phrase “come dance with the freaks and gypsies”. Also the use of electronics makes for a more interesting song which makes you want to listen to more. “Runin’ runin’ runin’ with the outcasts,” is a phrase which is repeated throughout the song. It’s very catchy and keeps you focused on the message.

The instrumentals are very much pop oriented but with the added electronic sounds it veers away slightly from the typical genre music. Also, her vocals add a gritty and harder edge to the music. The sound of the song is great and it is consistent on its message. It goes a bit against the genre however, but with this set-up the twist works. She is able to make the song darker with her vocals and the way she goes about presenting herself as an artist. All of these aspects make for an interesting and well rounded piece that should become a fast hit.