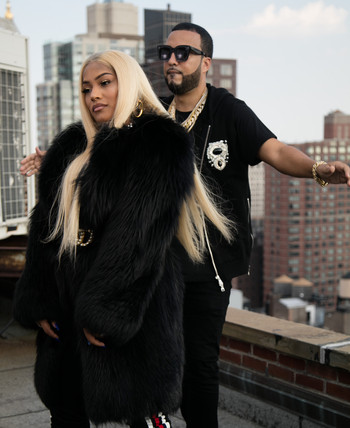 After the break-out success of her critically-acclaimed debut mixtape, STEFFLON DON releases the video for her first official single ‘Hurtin’ Me’, featuring NYC rapper French Montana. Directed by Steff & Luke Biggins (Yxng Bane, Stormzy), ‘Hurtin’ Me’ is the first official single from Steff’s Universal Music imprint V-IV Records and also serves as her first release under new US label Quality Control (home to Migos & Lil’ Yachty). The video comes hot on the announcement that Steff will also be performing alongside Future on his upcoming European tour.

Since its premiere as Annie Mac’s ‘Hottest Record in the World’, ‘Hurtin’ Me’ has been playlisted across the Radio 1 & 1xtra, garnering over 1.7m streams on Spotify, over a million streams on YouTube & was the highest Shazam entry in the UK of any new release. The video clip, shot in the hills above Los Angeles, features both artists and combines Steff’s unique one-off style and attitude with French Montana’s world renowned swagger. The track, produced by Rymez (Wiley, Jeremih, Lil Yachty, Sean Paul), is the perfect reflection of her multi-cultural background and influences from her upbringing in Jamaica, London & Holland and is already becoming this summer’s biggest dancehall anthem.