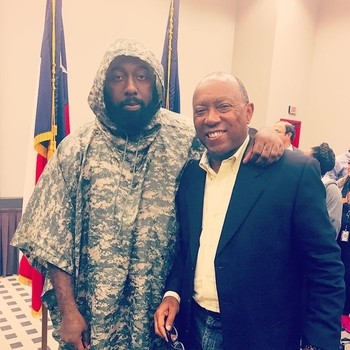 Houston rapper Trae Tha Truth is widely respected for his charity efforts and his annual Trae Day initiative, having received the key to the city earlier this summer from Mayor Sylvester Turner. With Hurricane Harvey crippling Houston and the surrounding areas this week, Trae has gone to work, marshaling boats to help those stranded in the flooding to evacuate safely and providing supplies for the homeless and displaced. In an effort to further help the city, Trae has launched a GoFundMe campaign to raise money to put directly back into relief efforts. With a stated goal of $250,000, the campaign has already raised over $50,000, with the money going to Trae’s Angels By Nature nonprofit organization. Celebrities such as Snoop Dogg, Mike Epps, and T.I. have supported the campaign thus far, and you can donate too by clicking here.