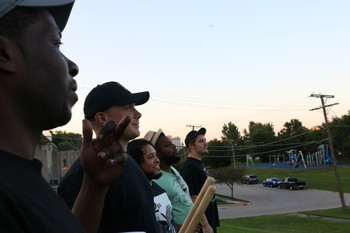 Like a gift box, there is always a surprise hidden in the performances of the new band, ‘Box of Chocolates’ (B.O.C). The new magic they are about to weave is called ‘US OR NOBODY’, a mixtape that will be out early November. The event follows the band being signed as the exclusive, new artists of the recently launched publication, HOT NOIZE ENTERTAINMENT MAGAZINE!

As the lead singer of BOC, Jesse De La Cruz is a man on a mission. ‘US OR NOBODY’ will reveal new sound experiences to the world, and listeners can expect the usual catchy metaphors along with a mix of new hip-hop that Jesse delivers with an old school twist.

Commenting on the new mixtape, Jesse said, “We aren’t any genre. We are every genre. Our music is like a box of chocolates, you never know what you’re gonna get.”

Jesse De La Cruz is an independent contractor, lead singer of BOC, and promoter. His trend setting style has made him nothing less than the bonafide artist of America. He is also about to release a new album, ‘B.O.C.”, and is in a partnership with 160 Entertainment and Management Group. Before the fall of 2017, fans can also expect to hear two new singles, “Be A Star” and “Coming Home Tonight”. As the band goes forward, on the cards are new EP’s and performances.

In the past, Jesse has starred at shows including Fat Joe, Frankie J, Rehab, Buck Cherry, Twista, Bone Thugs, TECH 9, 3-6 MAFIA and more. His music is inspired by legends such as Lenny Williams, Marvin Gaye, Led Zepplin, The Beetles, 2Pac, BIG, Michael Jackson, Prince, Jesse from The Neighbourhood, etc. He is also influenced by current stars such as Mars, Adele, John legend and Childish Gambino.

Jesse is a true leader of his band, and he accomplishes his goals with four traits that are unique to him: Determination, Swag, Street Smarts, and Hunger. Born near Chicago where still lives, Jesse De La Cruz overcame difficult teens and twenties, only to stride forward and embrace the positive side of success and earn success and power in the music industry.