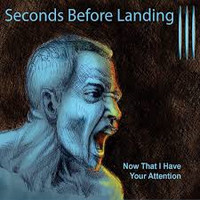 After keeping everyone waiting for the past three years, finally Seconds Before Landing makes a compelling comeback with their third album, “Now That I Have Your Attention”.

Pittsburgh based John Crispino, the talented composer and vocalist have recreated the magic similar to what their first critically acclaimed album, “The Great Deception”, has retained all these years. Released on June 21, 2017, “Now That I Have Your Attention” features far more intense and matured lyrics than their previous works. Crispino has skillfully woven a story with every word he has penned to bind each song closely into one album. The album comprises of twelve songs including an Intro which frames the ambiance and vigor for the rest of the songs. The husky voice narrative over the radio and the background female vocals by Vanessa Campagna and Carrie Jackson are meritorious.

Eventually, as the first song, “4 am”, begins and the words “I knew this was going to happen” touches the eardrums, with a single stranded note from Jamie Peck’s piano, along with some audio effects and background vocals, the song gradually creates a grim atmosphere and then the faint cry of helplessness takes over, before the guitar strings are stroke which ultimately paves a slow way towards the next spell with “You are giving me a headache” and “Wandering souls”. The intense lyrics and the guitar strings struck at the perfect moment retain a mesmerizing effect as the songs fade through the dark, one after the other. It is really commendable that just like their other two previous albums, the sound quality is remarkable.

The immensely qualified guitarists clearly depict the level of confidence this album bears as Eric Maldonado and Steve Schuffert strike the guitar chords along with J.D. Garrison as the bassist and Rick Witkowski, the rhythm guitarist. John Crispino definitely shows his dedication and belief in each and every word he sings.
The multi-instrumentalist John Crispino has again gone his way to have a special guest and his friend, John Palumbo, from the progressive rock band, “Crack the Sky” join him for the song “Moment In Time” with his E-bow guitar. No wonder “Moment in time” is a master piece by itself.

The last song “Without Your Soul” compliments the album on a strong and positive note, giving a glimpse of the brightest side of our life. It gives us an optimistic eye towards the journey of our life, the chances we take, the little invaluable things we ignore and as they say”Freedom is just a big word”.

The whole album is one of the best gems that potentially explore the ambient progressive rock music. The soothing and gentle rhythm of the resonating musical instruments compliments this exceptionally powerful and melodious work. Just like the previous albums, “Now That I Have Your Attention” too has its music mastered by the two time Grammy nominee and Pink Floyd engineer, Andy Jackson.

Considering all fronts, the album seems reminiscent of the strong influence over progressive rock music.