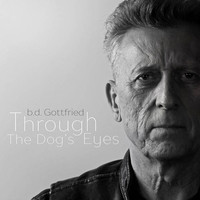 Through The Dog’s Eyes by bd. Gottfried is an eclectic album with a lot of influences drawn from those he has worked around over the years which reads pretty impressive. This is an album he’s obviously proud of, and the moods it swings through tell all about that. As a veteran musician, he’s seasoned beyond that of the average artist, and it comes out in the music and his lyrics. But to merely just associate him with his past work over the decades would be selling him short. This album comes recommended for that and the difference it offers up concerning most modern rock of these times. The album kicks off with “Something You Weren’t,” and you can give or take a piece if you wish or not. This music is heavy handed but the vocals add a lighter texture to it all, like AOR/Progressive Rock. But this is more of an Avant/Progressive style that could be heard on radio. Much akin to that of the Alan Parsons Project, but less radio oriented. But that is only one way to describe it, as there really is a wide range from that to blues to be found on the album. The next track, “Crosshairs” is even more complex, and they both turn out to be awesome in succession. A clear nod to David Bowie on the latter.

That’s a lot to take within a short time leading to “Blame It On The Money” which has even more of a Bowie ring to it, but in his voice you also get singers like the duo of the Cars and Bryan Ferry. This is one of the better tracks on the album, with likely the most accessible chorus of them all. To remind of what Bowie influence can be heard, it’s certain tracks from his last two albums. It’s not like classic Bowie or Ziggy Stardust, it’s more of the modern influence. Either way this is a fantastic track. And while the music is a lot different, it’s not typically structured. It’s a “more is more’ thing. The same standard is kept up on “Eye Of Time” with a melancholy vocal this time, which goes just about everywhere. It’s amazing how he intertwines the decades to come up with the styles of music within the songs. There is a message by now to be heard and the album starts to come together on that strength alone, with not only some great songwriting but well-delivered. This is kept up on “Frequencies” if a little less lyrically profound. This is a consistent track nevertheless, it just drags a little. But I still like something about it, as it hypnotically draws you in to find something there.

“Breakaway” is a turning point for the vocals, leaving him in the low registry to get a brooding point across. It’s almost a point of spoken word, but the music does occasionally kick up. “Reformation” is also very downbeat, with an almost gothic touch to it. This one reminds of vocalists like Peter Murphy. It’s a dark track with only a few light factors going for it. To call this a ballad would be pretty-appropriate. “Do We Have Love” is much better and more interesting, and the following track “Incantation” is much better. The album goes out with a bang on “SOS with an IOU” with one of his best efforts. Feel your way through it.