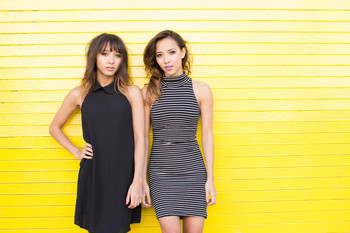 Nalani & Sarina, strong female artists and identical twins, are making their mark in the music world. They’ve been spreading their high-energy synchronous sound of “rock ‘n soul” across the Northeast for several years now. They have been playing, singing, and writing together since they were kids, and their smart, dynamic live show has made them favorites throughout the Northeast. Their music has appeared on Sirius XM radio, has been featured on WHYY’s “Friday Arts”, and they’ve received coverage from impressive sources including Atypical Sounds, Baeble Music, NJArts, Popdose, Music Times and many more. Recently, Nalani & Sarina did a TEDx talk, held independently at the Firefly Music Festival in Dover, DE, that includes a live performance and an inspiring look at their personal story.

These young women have amazing voices, both in songwriting and public speaking, which is clear in their TedxDoverSalon Talk. Titled “To Thine Own Self Be True,” Nalani & Sarina talk about what it’s like to be young women in love with music since birth, while struggling with the stigmas against female performers in the music industry.