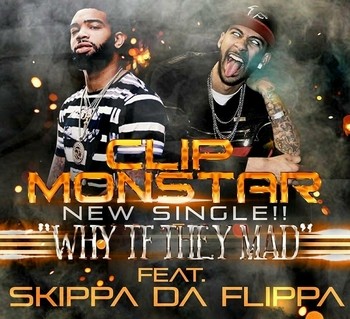 Joshua Beale professionally known by the stage name, Clip MonStar hails from Buford, GA. The recording artist and show host comes equipped with creative punch lines, an aggressive flow, and a well-crafted style that has quickly sent shock waves across northeast Georgia. He and his brother begin distributing worldwide releases from four of their label’s top artists in March 2017. The two serve as the heads of MonStar Productions and MonStar Records. In May 2017, Clip released his mini-album, “Evolve” and followed with the release of the smash hit single, “Why TF They Mad?” featuring rap star, Skippa Da Flippa. He followed with the July 28, 2017 hit single release of “Mad Bag” featuring Atlanta rap star, Lil Donald. Clip MonStar has enhanced his movement hosting shows across Georgia, conducting radio interviews, earning radio spins for his hit single, “James Bond,” and most recently claimed the crown of 107.9 Battleground Champion. Check out the video for “Why TF They Mad?” at:

Connect with Clip on IG – http://bit.ly/2a8tWJ4
Get the single on iTunes – http://apple.co/2uBtUkO