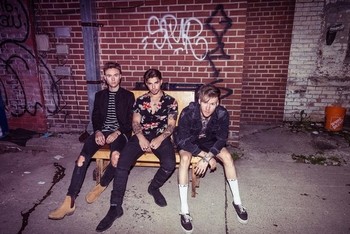 NEW CITY has entered the Canadian chart at number 22 on the Top 40 chart, with new single ‘Dirty Secrets’ jumping 7 spots in just two weeks. Today, the band (Adrian Mitchell/vocals, Jed Webster/guitar and Nathan Brown/drums), release the video for the track. The video, directed by Sean McLeod, was filmed in a motel room in Niagara Falls, ON and can be watched below.

‘Dirty Secrets’ was released last month and has already amassed over 2.9 million streams. Of the track, Earmilk declared, “NEW CITY has the perfect addition to your summer playlist,” and Billboard proclaimed, “with the irresistible pop sensibilities of New City, they are a secret you’ll want to share.” Singer Adrian recently told Billboard, “We wrote this song after some wild nights in LA. It was easy to write because it was inspired by true events; the track came together really naturally. And come on, everyone has dirty secrets, and we wanted to embrace them in this song.”

The band, all living in Toronto, ON, have quickly gained attention in their hometown with the premiere of their first single “Coachella” last month. The track has amassed over 1.6 million streams, with Clash Magazine declaring it a “perfect pop confection.”